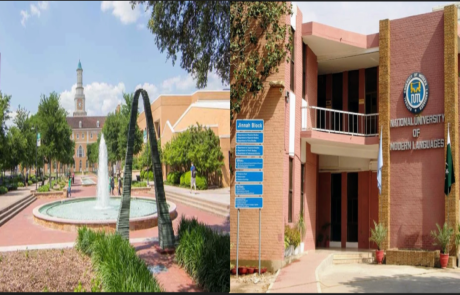 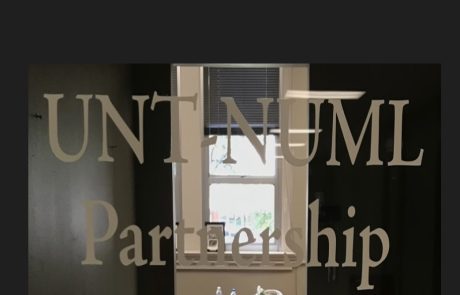 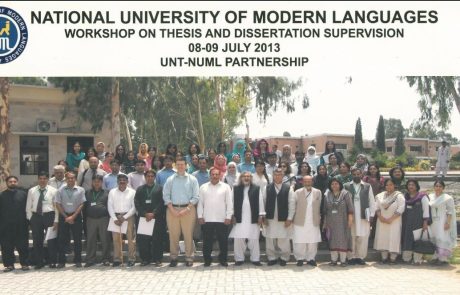 In 2012 I applied for a million-dollar grant from Department of State (DOS). This is a brief story of how the design thinking and agile practices of a team made it into a successful experience.  I learned about the DOS grant when a friend sent me a link to it. Funded by DOS, these grants were meant to create three year partnerships between US and Pakistani universities. As a humanist who believes in serving the larger community outside of academy, I found this to be a wonderful opportunity to have direct impact on people’s lives , especially since the project could help enhance the cross-cultural relations between people from the US and Pakistan, my native country. I decided to apply for the grant to develop a partnership with National University of Modern Languages (NUML), Pakistan.

After a careful reading of the DOS announcement, I jotted down the following points (Fig 1) about my understanding of it: 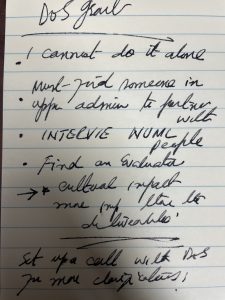 I understood that I needed someone with the institutional reach to help me with this project. I sent a copy of the DOS announcement to John, then VP for International Studies, and asked for a meeting. John was gracious enough to give me his time and in our first meeting we decided on dividing the work in the initial phase:

John and I also agreed that I will write a draft proposal within ten days, while John reached out to the University administrators. We could only have a planning meeting with the upper administration after I had a working draft. I jotted down our planned workflow during our meeting (Fig 2.1 and 2.2). 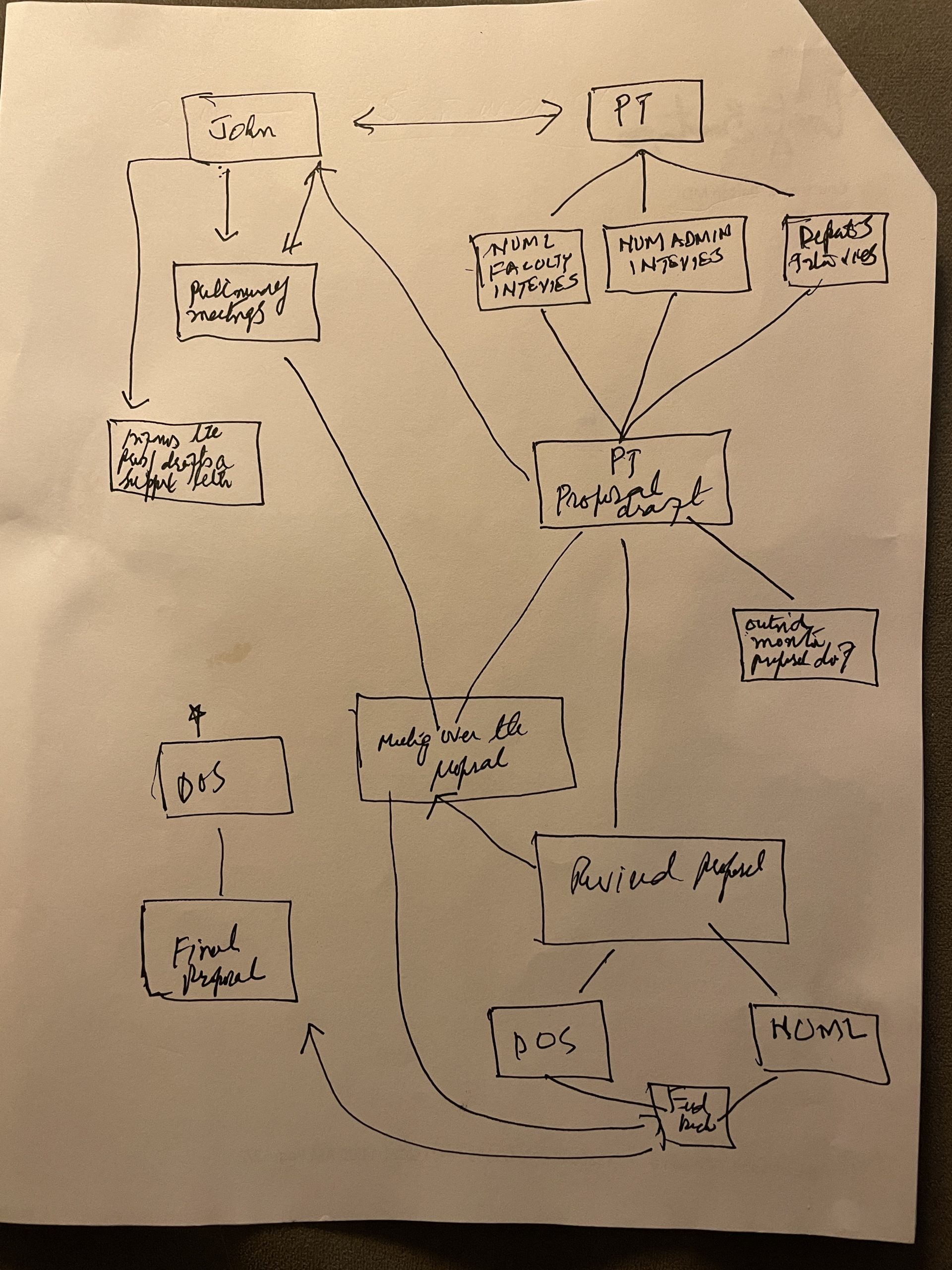 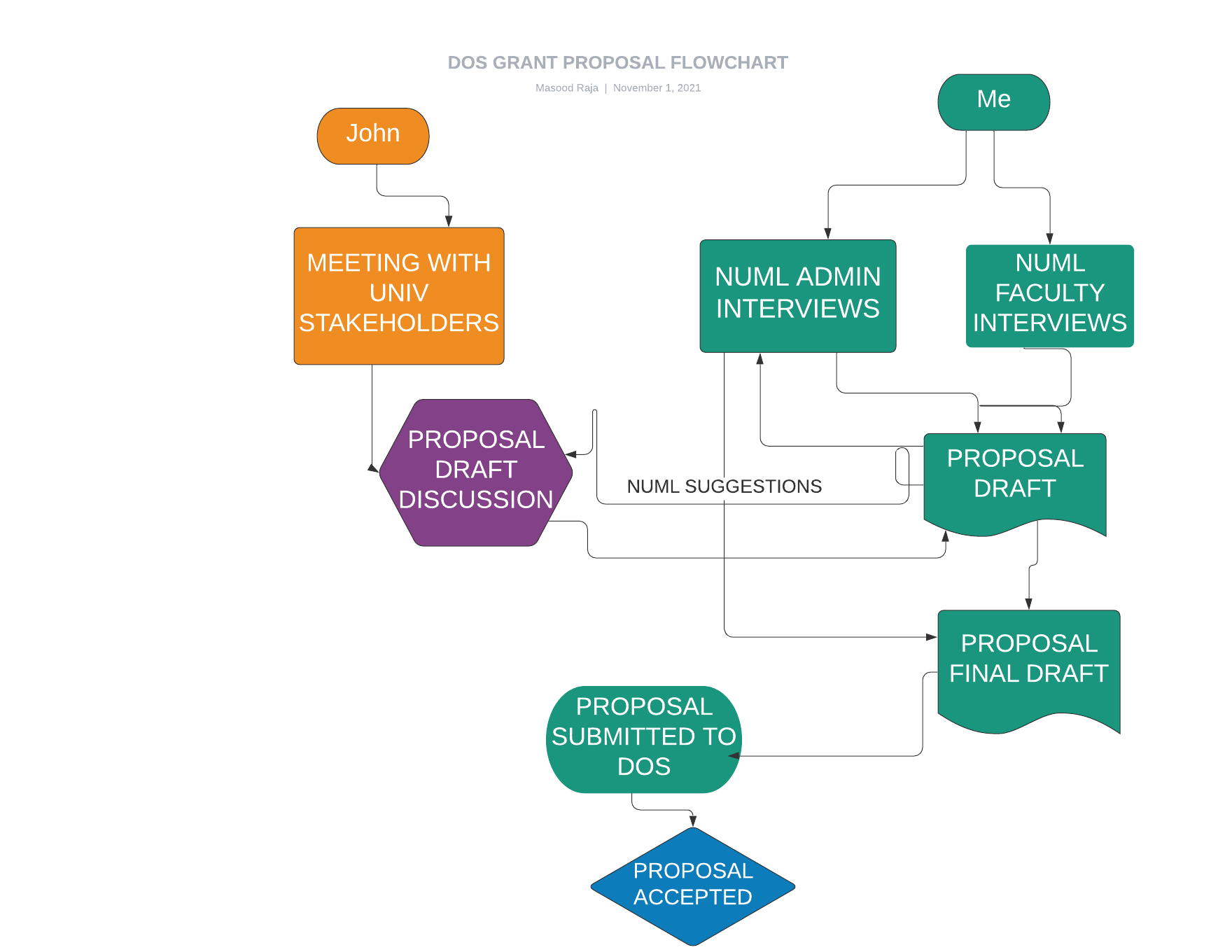 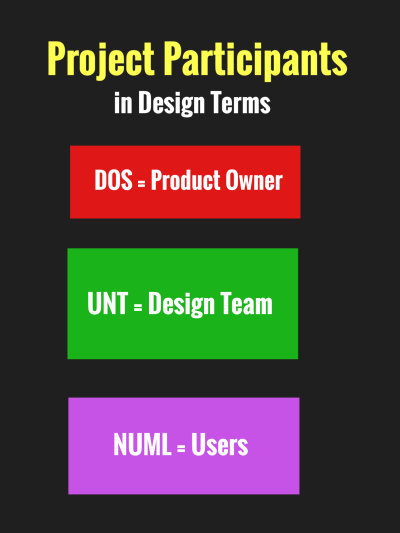 I decided to conduct two sets of telephone interviews with five top administrators of NUML and with five NUML English Department faculty members. The interview with the administrators was in shape of a two hour conference call, whereas the faculty interviews were one on one conversations of one hour each. I conducted two sets of interviews because I wanted to find out the administrators’ expectations, but, more importantly, I also wanted to seek out the aspirations and possible pain points of the faculty, the actual users for whom I was writing the grant proposal.

My conference call with NUML had five participants: The Rector, the Director General, the Registrar, Director Academics and Director Graduate Studies. (Surprisingly, the Chair of English Department was not included by the NUML administrators in this conversation). NUML is a peculiar institution: though funded by the Higher Education Commission, NUML is mostly governed by retired army officers and is evaluated by the Army General Headquarters. As a result, the administration is pretty hierarchical and top-down. They all were excited about the project and the rector pointed out that if correctly done, “this partnership could transform the English Department.” The group was highly interested in enhancing the research capabilities of the English department. This was a fruitful conversation, as I mostly played the role of the listener and jotted down the main points of the conversation. I informed the group that after I have written down the first draft of the proposal, I will share it with them so that they can suggest any changes and additions. Here are some of the main points that came through from the administrators’ point of view:

I conducted  interviews with five faculty members over the phone and the faculty were selected at random. I explained to them what could possibly be included in the project, but more importantly I asked them to share their hopes and ideas about the program. The faculty were generally pretty skeptical about the project and shared some of the following thoughts and ideas.

After I compiled the data from my interviews, I charted my process as follows: 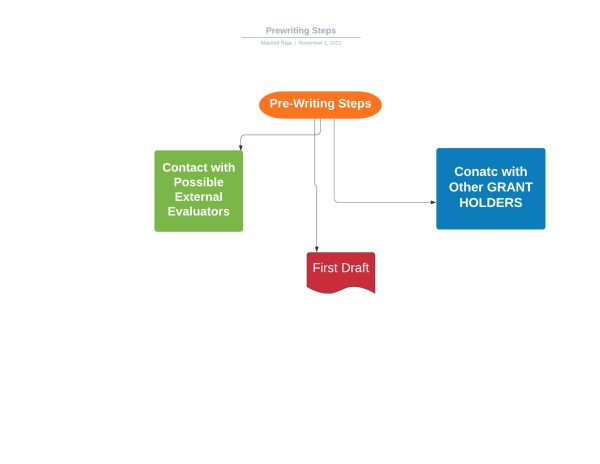 As I started writing the proposal, I kept in mind the themes that emerged from my interviews with the NUML administrators as well as the faculty and also the expectations expressed by the DOS in their grant announcement. After a brief telephone conversation with the DOS representatives, it became even more clear to me that the cross-cultural aspects of the grant were more important than other deliverables. To ensure if other grant recipients had kept this in mind, I reached out to the two other institutions that had previously received such grants. In both their cases, they had brought only 5 to 6 research scholars to their campus over their grant period. Keeping the main aspirations of NUML faculty, as evident in my interviews, I felt that bringing more of them to our campus would not only fulfill user needs, it would also enhance the main intent of the grant: People-to-people relationships. Thus, my draft used the information gathered from NUML and then reconciled with the expectations of DOS.

In my first draft, besides other things, I included the following areas as the possible areas of cooperation with NUML:

Note that all these were the areas suggested by the NUML administrators. In these areas, I planned to deliver on the Faculty Development aspect in two ways:

Furthermore, keeping in view the pain points gleaned from the faculty interviews, I also created a selection criteria for research visitors, planned an early liaison visit before starting the programming, and promised to make all activities transparent and open for suggestions and further improvement.

Reaching out to External Evaluators and Budget Section

As I developed the draft, I also started reaching out to various established sociologists for a contract as the external evaluator of the grant, if we won, and liaised with the budget section of UNT to let them know that I would soon have the draft proposal to start working on the proposal. I was able to get a tentative commitment from Michael, an established sociologist, to be the possible external evaluator, and the budget section confirmed that they would be ready to work with me as soon as I had the first draft ready.

After I had discussed the draft proposal with John, we both met with UNT stakeholders that included several Deans and their staff. I presented my findings and my proposal to the group. All stakeholders were delighted at the prospect of developing an International partnership. They also declared their enthusiastic support for my proposal and my project if we won the grant.

The first stage of what seemed like a quixotic effort in the beginning ended very well!

Soon after the stakeholder meeting, I met with the budget office and they informed  me that I might have to cut my programming in half! The reason:

All research universities charge a Federally approved  Indirect Cost Fee to the federal grants. In our case it was 48 percent of the total grant.

This was shocking to me because it meant that I might have to cut the research visitor program, central to the NUML faculty aspirations, in half. I asked the budget office to find a way to reduce the Indirect Costs charges. They informed me that if I could issue a subcontract to NUML for all the activities conducted at their campus, then I would save on the Indirect Costs, as UNT could not charge anything if the activities were not conducted in the US. So, we prepared a subcontract and were able to get if signed from NUML administrators in time before submitting the final grant.

The last hurdle was thus removed and I was ready to finalize the proposal!!

After incorporating suggestions form NUML, and UNT stakeholders, I revised and finalized the final proposal. John and I took a final look at it, and then sent it to the Grant Office for formal submission. In so many ways, we had done the impossible!

We had prepared and submitted a million dollar Federal grant proposal in 30 days!

One month after the submission of our final proposal, I got an email from the DOS: We Won the Grant!!

I ran the program for over three years. During this time my colleagues and I taught eight courses on NUML campus and 58 NUML scholars visited UNT to finish their research: all of them have now finished their Doctoral Degrees. We also prepared a detailed hybrid survey of the complete project that included surveys as well as interviewers from the NUML faculty. The most important finding in the surveys and interviews was that the experience had transformed their views about American people, which meant that the program had achieved its goal of developing people-to-people understanding!

Personally, it was a deeply rewarding experience for me, for I learned the value of using constant input from the users and then changing and revising the programming accordingly.

Key Lesson: Users Matter the Most!!

In my conversations, after the award, with NUML administrators, I learned that the DOS had brought them two finalists for the grant. UNT and another institution. NUML, the users, decided to partner with UNT. Their reason: Not even a single person from our competitor had actually talked to anyone at NUML!

Thus, our proposal won because it was truly User-Centered! 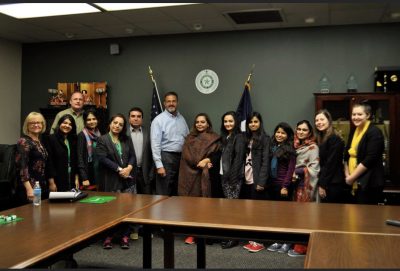